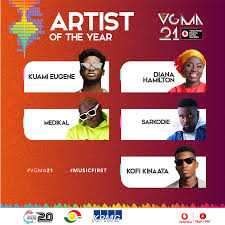 Organizers of the annual Vodafone Ghana Music Awards, Charterhouse, are hopeful this year’s edition may be held in two months despite the threats the deadly coronavirus pandemic is posing to the entertainment industry.

Although the government has partially lifted the ban on social gatherings, events are not to have large crowds. The situation will persist till the end of July when the government introduces the second phase of the easing of restriction.

When asked about the future of this year’s edition on Emefa Apawu’s Beyond the lockdown on Joy News, CEO of Charter House, Mrs. Theresa Ayoade answered in hope that it will be held in August.

She further mentioned that they were re-strategizing to hold that the annual awards ceremony later this year.

She acknowledged that the outbreak of the disease in the country threatens the revenue they were targeting to make this year.

“The challenges of putting together logistics and not being sure of expected revenue are real issues. In normal times, we will have been able to sell up to 4,000 tickets in VGMA-related events, but it is not so now,” she said.

Mrs. Ayoade added that whilst this year’s version would not be the event is known to be, patrons could be assured a good show.

“It may not be exactly as it used to be in the past but obviously, with what is happening now, it’s going to be a downscale version,” she said.