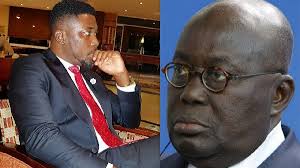 Maverick musician and Political activist Kwame Asare Obeng, popularly known as A Plus has launched a barrage of attacks on President Akufo Addo insisting he has decided to ‘reduce the Presidency to an avenue for settling personal scores’ that is why as a “lawyer” the President is being taught labour law by an auditor.

According to Mr Domelevo the current practice and law on leave does not support the presidents directive which he also described as an action in bad faith since there are several government officials with accumulated leave.

Following this spirited defense from the auditor general,  A Plus then took to facebook to express his disappointment in President Akufo Addo’s for allowing the quest to settle scores blind his appreciation of the law.

“When a “lawyer” president and his bunch of incompetent suit wearing mofos decide to reduce the Presidency to an avenue for settling personal scores, an auditor teaches him labour law. Since when did it become the job of the president to decide who goes on leave and who does not? You do this and make reference to what Atta-Mills did sometime ago. No wonder you gave money out to Kroll and associates like Atta-Mills gave to Woyome. Where is the change we fought for”
The former NPP activist then accused the President of stifling the fight against corruption contrary to his pledge to rather fight the canker
“You promised to fight corruption but you are rather fighting everybody who fights corruption. Dishonest and hypocritical Nana Addo!!! It is no more his people his people. It is him!!!”