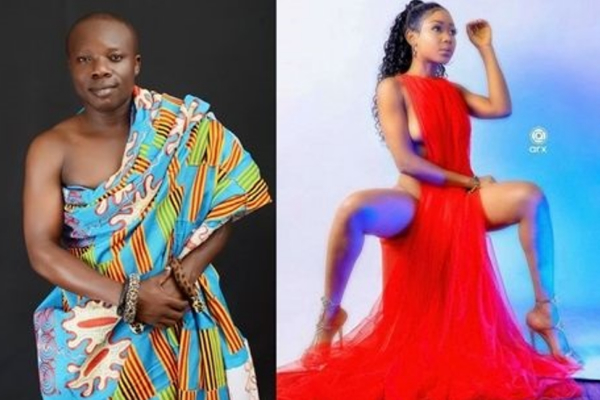 Actress/Instagram model, Rosemond Brown popularly known as Akuapem Poloo has rendered an unqualified apology to the Apesemakahene of Mampong Akuapem.

The controversial actress recently clashed withthe Apesemakahene of Mampong Akuapem, Nana Yirenkyi 1 after he accused her of dragging the ‘Akuapem’ name into the mud following her recent semi-nude photoshoot to celebrate valentine’s day.

Nana Yirenkyi 1 who asked Akuapem Poloo to drop the Akuapem from her name threatened to go to all lengths to legitimately compel her to stop using the name.

However, the threat seem to have not gone down well with the video vixen who told the chief to mind his business as it was part of her job as a model/video vixen to expose her body.

In a swift change of heart, Akuapem Poloo in an interview on PeaceFM apologized to the Chiefs and people of of Mampong.

She said, “I am a young person. If I do something wrong, I’d expect that you call me and talk to me personally. I ask Nana Yirenkyi I to forgive me.

“If I have committed a wrongdoing against the entire Akuapem land, he should forgive me”.