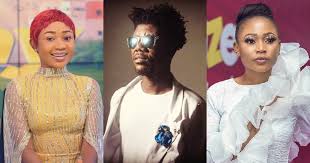 TN Records, the record label that singer Akuapem Poloo is signed onto is throwing its weight behind her insisting ‘In everything we are with her. We continue to give her support and we continue to believe in her because she always likes to do things in a different way”

Akuapem Poloo, known in real life as Rosemond Brown, is said to be in trouble after she posted on social media a nude photo of herself featuring her seven year old son.

Aside the Ministry of Gender and Social Protection condemning the act and vowing to pursue the matter, the Criminal Investigation Department of the Ghana Police Service also invited her for questioning.

But according to label boss, Tic, they are not concerned about the current brouhaha that is surrounding their artist.

Discussing the matter with Mzgee on Showbuzz on 3fm, Tic stated that the record label has no problem with Akuapem Poloo’s action.