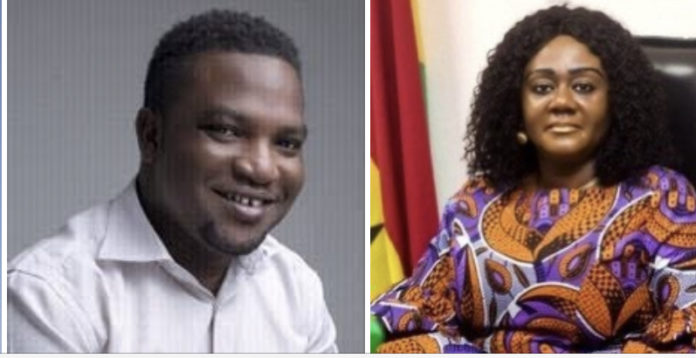 Music producer, Wei ye Oteng says the COVID-19 pandemic played a part in what has been purported as an abysmal performance of former Creative, Arts, and Tourism minister, Barbara Oteng Gyasi although she succeeded a hardworking minister, Catherine Afeku.

Speaking on Tv3’s “Simply Showbiz” the Drum Lyne Entertainment boss believes the former minister was warming herself up for her new office until the pandemic popped up contributing to her deficiency.

“…trust me, Catherine Afeku did very well during her tenure [as a minister for the sector]. It was rather unfortunate for my namesake [Barbara Oteng Gyasi] upon her assumption into office. Just when she took over, covid set in so everything came to a standstill – to an extent there was a lockdown.

Asked as to whether her two years in office wasn’t enough to make an impact, the music producer maintained his stance:

“You don’t expect someone to change the phase of things upon taking office in some few months. Yes! She didn’t do well but, in my assessment, covid had been with us for almost a year and remember we went on lockdown around April. To me, there wasn’t much room for her to operate so I wouldn’t join hands to say she didn’t do well rather, blame covid [for her poor performance].”

He believes although things didn’t go well for the former minister, the appointment of Dr. Ibrahim Mohammed Awal will give the sector a facelift considering his juicy credentials.