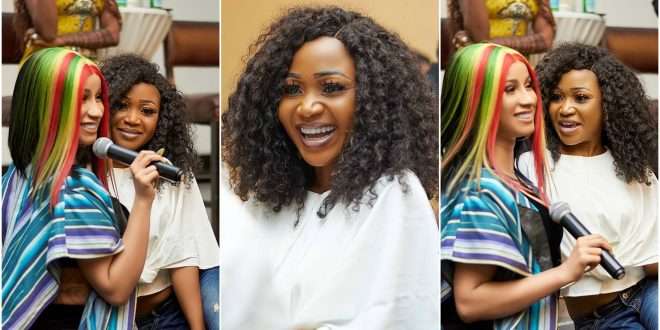 Actress Akuapem Poloo has said Grammy Award winner, Cardi B has intentions of featuring her in her upcoming song.

Born Rosemond Brown, the social media sensation said Cardi B has invited her to America to join her on this project.

Akuapem Poloo made this known in a conversation with Giovanni Caleb on Showbiz 360.

” I have a lot of travelling plans coming up because Cardi is giving me an invite. She wants to feature me in one of her songs, she wants me to model for her so Ghana should watch out for me.” She stated

Akuapem Poloo was over the moon after American rapper Cardi B followed her on Instagram on Monday.

Cardi B further went ahead to share the actress’ photo on her Instagram story twice tagging Poloo as her twin in one of them.

This was after the two met at a ‘Meet and Greet’ event at the Kempinski Hotel in Accra.