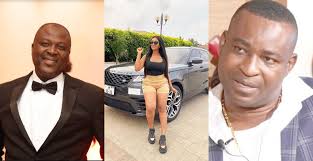 According to Hajia4Reall’s lawyers from Kumasi based lawfirm Dwumfour and Dwumfour “While preparing to take the appropriate legal steps to vindicate our client’s right, our client deems it necessary to let the general public know the truth and also to disabuse the minds of the public of the misinformation and defamation of character peddled by the said Chairman Wontumi”

Chairman Wontumi is said to have alleged Business Mogul and brother of former President Mahama, Ibrahim Mahama snatched Hajia4real from another businessman and CEO Kenpong Group of Companies Kennedy Agyapong and that he was able to do that after buying a car and house for Hajia4Real.

This comment comes after the Ghanaian socialite received a Range Rover car and a new house at her birthday party which had Mr. Ibrahim Mahama and in attendance.

But in a statement,  the solicitors of Hajia4reall set out the following facts insisting:

“Our client wishes to state in specific response to the palpable falsehood and malicious publication as follows:

1. Our client is not the girlfriend or a paramour of Mr. Ibrahim Mahama

2. Our client has not received any vehicle and/or a house as her birthday gift or present from the said Mr. Ibrahim Mahama.

3. Mr. Ibrahim Mahama has not “snatched” our client from any other person as was portrayed in the said video.”