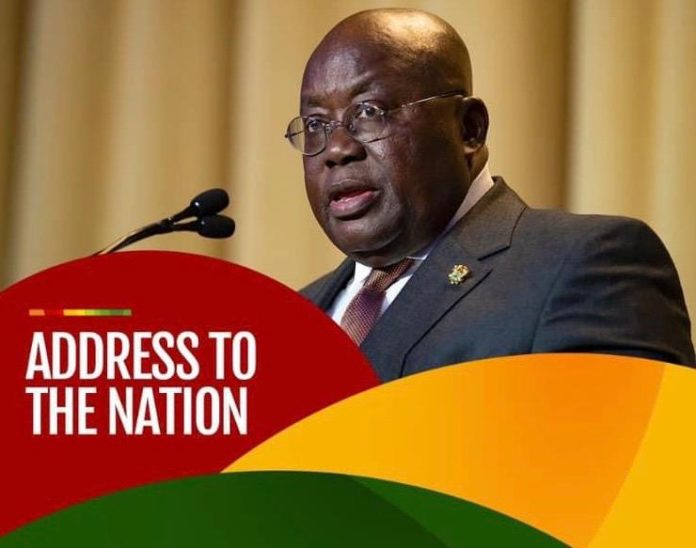 President Akufo Addo has lifted the ban on the operation  of some recreational and tourist sites across the country in his 14th update.

“In consultation with the Ghana Tourism Authority and the health experts, I am announcing the reopening of our nation’s tourist sites and attractions, so they can begin to receive visitors. Open air drinking spots can now function. The management of these facilities are tasked to enforce enhanced hygiene and social distancing protocols”

However, other places for entertainment and recreation such as “Beaches, pubs, cinemas and nightclubs remain closed until further notice”.

The President during his 10th address to the Nation on the CoronaVirus Pandemic extended the suspension of public gatherings including “sporting events, nightclubs, cinemas, drinking spots, bars, beaches, festivals, funerals….” till 31st July.

But in his latest address, President Akufo Addo eased more restrictions including those on the number of congregants, churches and mosques can have at any particular time and extended their service hours from one to two hours.

“Our Churches and Mosques have been open for prayers and services for the past seven (7) weeks, adhering to twenty-five per cent occupancy (25%) or up to one hundred congregants over a time duration of up to one hour per service. I extend my deepest appreciation to our religious leaders for their strict adherence to the safety protocols, which have prevented any known outbreaks, since they restarted their services. I have sorely missed going to Church, as I am sure many others have. I am, therefore, very happy to announce that, in consultation with our Church leaders, from 1st August, 2020, the restrictions on the number of congregants worshipping at a time in Church will be lifted, with the length of worship extended from one (1) to two (2) hours per service. Church leaders, who are desirous of implementing this enhanced easing directive, must ensure that congregants wear face masks at all times, and the one (1) metre social distancing rule is scrupulously applied. These same guidelines apply to worship in our Mosques. With greater numbers of congregants likely to return for worship, I would, respectfully, ask the religious leaders to pay even greater attention to the fresh air ventilation of their premises, rather than relying on the use of air conditioners.”

Another significant development is in the transport sector where the limits on passengers on local flights and in public transport has been removed.

“Government has taken the decision to lift the restrictions in the transport sector, and allow for full capacity in our domestic airplanes, taxis, trotros and buses. The wearing of masks in vehicles and aircrafts, and the maintenance of enhanced hygiene protocols, remain mandatory. Private burials, still, with a maximum of one hundred (100) persons, can continue to be performed. Our borders, by air, land and sea, remain closed until further notice for human traffic. However, given that there are Ghana residents stranded abroad, special dispensation will continue to be given for the evacuation of our nationals and residents back to Ghana, where they will be subjected to the mandatory quarantine and safety protocols.”

As of July 24, 2020, the nation had recorded over thirty-two thousand cases but President Akufo Addo is convinced the situation is under control and Ghana is indeed winning the fight against COVID-19:

“Fellow Ghanaians, we are in the fifth month of the outbreak of COVID-19 on our shores. At first glance, it is alarming to see that thirty-two thousand, nine hundred and sixty-nine (32,969) people have so far contracted the virus. But a closer look at the data will tell you that we are steadily on the path towards limiting and containing the virus, and, ultimately, defeating it. The figure to look out for is the number of active cases. When I delivered Update No. 13, the number of active cases in the country, i.e. those who, as at 27th June, 2020, had the virus, stood at four thousand, two hundred and forty-five (4,245). As at midnight of 24th July, nearly a month later, the number of active cases in Ghana stands at three thousand, three hundred and seven (3,307). Again, a month ago, the number of recoveries stood at twelve thousand, nine hundred and ninety-four (12,994). Today, it is twenty-eight thousand, nine hundred and twenty-seven (29,494). This means our recovery rate has improved from seventy-five percent (75%) of positives, a month ago, to eighty-nine point five percent (89.5%), all in one month currently. Our hospitalisation and death rates have, consistently, been very low, some of the lowest in Africa and in the world. The Ghanaian people, mercifully, are not dying of the virus in the hundreds and thousands that were earlier anticipated and predicted, and that are being seen on a daily basis in some other countries. The behaviour of this virus has baffled the experts and defied most predictions, but five months on, we can say that we are witnessing a much milder manifestation of the virus in the country, than was initially feared. The rate of virus-related deaths has remained, persistently, low at 0.5% of confirmed cases.”