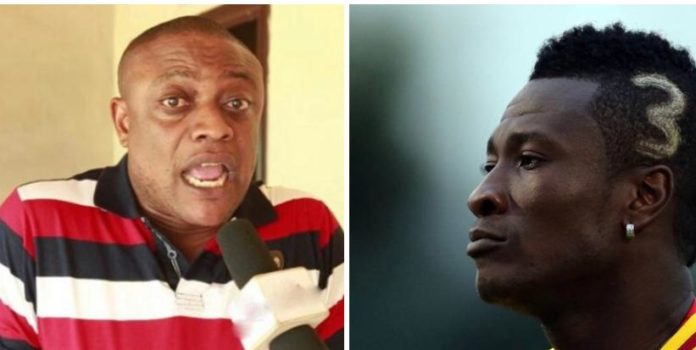 Father of musician Castro, John Eshun has advised Lawyer Maurice Ampaw against dragging the family of the musician through the mud in a bid to settle personal scores with footballer Asamoah Gyan.

Lawyer Ampaw, in a media engagement, claimed that Castro’s father had stopped pursuing the matter of his son’s disappearance because of some gifts he received from Asamoah Gyan

He also claimed that Castro’s mother had been abandoned and therefore suffering.

“I am most disappointed in Castro’s father. When the matter came up, he called me and said that he had heard of me and told me that they needed money. I had a discussion with him. After that, he was called on Skyy FM and was told that I had alleged that he had received a bribe from Asamoah Gyan. The man called me and insulted me over the matter. Do you know what Castro’s father has done? After receiving a thing or two from Asamoah Gyan, he became allied to the footballer. I wouldn’t call it a bribe, it was just showing sympathy,” he said.

Responding to this in an interview with MzGee, Castro’s father, Mr. Eshun, said that the last time he heard from Asamoah Gyan and other colleagues who were at the venue where Castro was last seen was a long while ago.

According to Mr. Eshun, the only time he recalls having an interaction with the lawyer was some years ago. Even with that, he says that the conversation was through another person.

I don’t know that lawyer. I don’t know when the family engaged him as our spokesperson. Maybe he has so much interest in the case but the family has not engaged him in any way. The best thing for him to have done was to come to the family and seek for information. Even if he had heard something, the right thing for him to do as a lawyer is to come to the family. We don’t know him. I have only heard his name. Even if he is standing beside me now, I can’t make him out…Castro’s mother is not struggling. People have been giving to her and she has her own business she is running.”

Whilst he would want to take actions against the legal practitioner, he says that such a matter is not worth pursuing.

“If you sue this man, and he goes to court, definitely you’ll have to engage a lawyer, and here in Ghana, where will this end?”