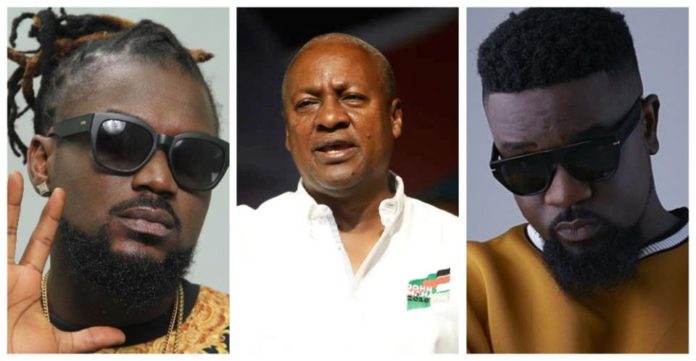 Presidential Candidate of the Opposition National Democratic Congress (NDC) John Dramani Mahama has observed that Celebrities that go out of their way to endorse political parties in an election year risk this move negatively affecting their vocation.

“It leads to the destruction of their careers and I don’t want to affect their careers,” he stated in an interview on Starrfm.

Celebrities like Prince David Osei and Empress Gifty have already thrown their weight behind the incumbent New Patriotic Party.

It is however the open support for the NPP from Musician Samini and the subtle endorsement of the same government by Sarkodie which has generated massive controversy.

But according to the former President it is the tendency of these endorsements to jeopardize the career of the celebrities that is why he has refrained from courting their support in this year’s electioneering campaign.

On the move by the two Ghanaian music greats, the former President said he had no animosity towards them and that his “attitude towards them hasn’t changed”.