People often say that a man who is mourning the death of a wife finds the grieving process more difficult than a woman who becomes a widow. Losing a spouse is painful for anyone, but society gives men an additional burden to bear. From childhood onward, men receive the distinct and consistent message that no matter what happens in their lives, they need to be strong and act as the providers for their families.

For Actor Eddie Nartey losing his young spouse was heart rending and excruciating.

This was largely because Vida Ohenewaa Nartey was laid to rest in March 2021, barely two years after the duo tied the knot in a private ceremony in September 2018 in Accra. 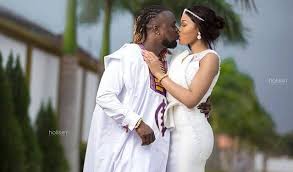 He started by explaining that “she was not well” for sometime. But like most people, the couple were not willing to share the  details of her health status with the public and as he pointed out “not even close friends knew of this”.

With sadness drawn all over his face, Eddie Nartey recalled how she fought very hard to stay alive but all to no avail.

He then revealed the ravaging health condition that killed her! Watch the interview here and find out!