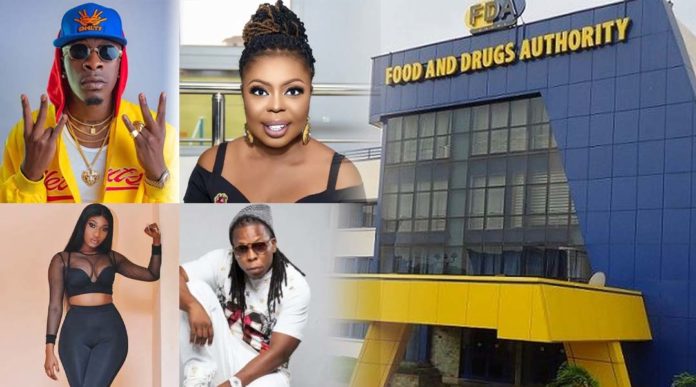 A private legal practitioner, Reindorf Twumasi-Ankrah has accused the Food and Drugs Authority (FDA) of trampling on the human rights of some Ghanaian celebrities.

Lawyer Twumasi-Ankrah in a lengthy article via the ghanalawhub.com tackled the recent brouhaha between some Ghanaian celebrities including Shatta Wale, Wendy Shay, Edem among others and the regulatory body.

The endorsement deal which ruffled feathers among the Ghanaian entertainment industry stirred up a conversation among the public.

Wading in the conversation, Lawyer Twumasi-Ankrah agreed that the FDA had the power to make the “Guidelines for the Advertisement of Foods” as stated by Section 148 of the Public Health Act, 2012 (Act 851).

He however went on to add that “the manufacture, sale, and consumption of alcohol by adults is not illegal in Ghana.”

“Having outlined the parameters within which an interference with a right is measured, we shall now proceed to address the potential effect(s) of the FDA guidelines on the guaranteed human rights of the persons affected by the ban.” He further noted

The FDA in 2015 banned celebrities from advertising alcoholic beverages.

The FDA said at the time that the ban was not only in adherence to a World Health Organisation policy but was part of efforts to protect children and prevent them from being lured into alcoholism.