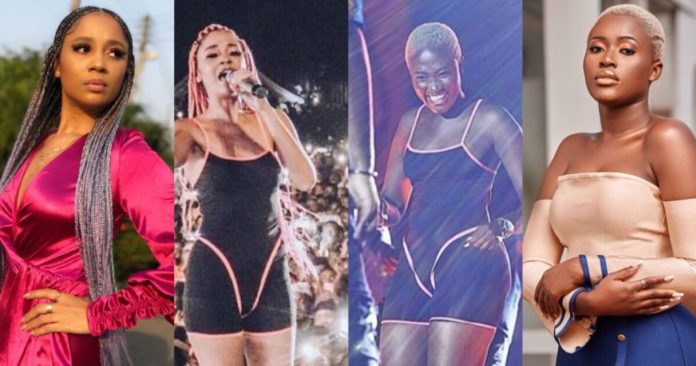 In a conversation with Berla Mundi on TV3’s New Day, the 35 year old ‘African Mermaid’ indicated that the curvy actress is more obsessed with her than she is with Medikal.

” I wore this outfit to the Back to Sowutuom concert which a young girl sells via Instagram and the next performance he (Medikal) did with her (Fella), she went to get the same outfit.” Debbie noted

The ‘Borla’ singer clarified that: ” I’m not saying she shouldn’t wear the same outfit as I do but when she does, it makes her look crazy and obsessed with me.

Asked if she believes Fella Makafui is obsessed with her, Derby answered with an emphatic, ” Yes. All she does makes her look obsessed with me and not the guy she came for. I don’t mind that she copies me because it means I influence or inspire her but its a bit ridiculous and creepy that she wants to do everything that I do.”

Early last year, Sister Derby disclosed that she ended her 3-year relationship with Medikal because she heard rumours that he was having amorous relationships with other women which included Fella Makafui.