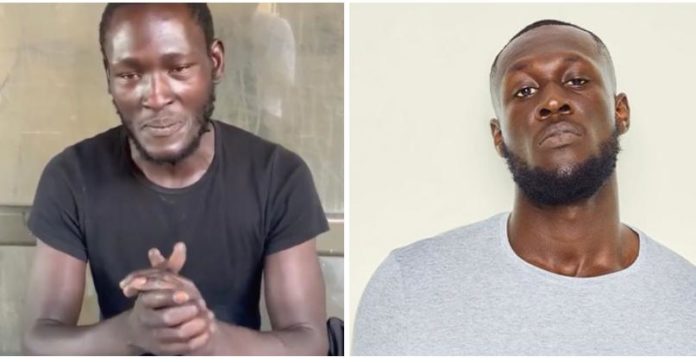 Luck is shining on a Ghanaian beggar who was found on Liverpool street in the United Kingdom.

The 29 year old who goes by the name Akwasi, was first approached because he was spotting a spitting image of Ghanaian-British Rap Star, Stormzy.

After the video went viral on twitter, obviously touched by the demeanour of the this homeless bloke, a young lady on twitter by name Najma Abdilahi started a fundraising project to help him. This is the accompanying note to the gofundme fundraiser.

“As some you may have seen the video of “Stormzy lookalike” as it has sparked some outrage. I will be raising money to go and donate to him. This money will go towards finding him a stable place and will help him with any financial problems he may have. The man very humble and very polite to the disrespect that was shown to him. May he be blessed with the money that he receives. He’s homeless so this money is going towards helping him get back on his feet and hopefully be the kickstart he needs for the future. He’s located at Liverpool Street Station. If you see him please be kind and generous.”

Well, it appears the response has been tremendous as the project titled ‘Help “Stormzy Look Alike’ which has been on for barely 8 hours has already garnered more than 12,000 pounds.

Akwasi received the news with alot of gratitude.

There is more goodnews as she reports that the management of Stormzy upon hearing of the man’s predicament has gotten in touch with her:

“Stormzys Manager just got in touch!!! Twitter really did it’s thing!!! God Bless You All’.

Stormzy who was born Michael Ebenezer Kwadwo Omari Owuo Jr, Stormzy, was recently named the UK’s richest Black Musician under 30 by the The Sunday Times.

He shared ninth place with Rita Ora—both in £20m. He also recently  announced he will donate £10m to fight racism against black people.