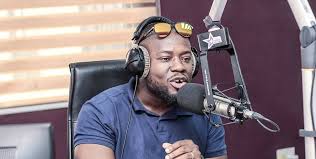 Radio and TV presenter, Caleb Adjomah widely known as Giovanni Caleb has announced he is leaving the EIB Network.

Giovanni who until his exit this week was the host of Starr FM’s late afternoon radio show, Starr Drive joined EIB network almost 4 years ago.

According to reports, Giovanni who is also the host of ‘Duvet’ on GhOne TV is heading to TV3.

Confirming his exit, the former YFM presenter took to his social media pages to express gratitude to the EIB family for the opportunity.

He wrote: “There are decisions that are very hard to make, but there comes a time in our life where God’s plans supersedes our own. I want to use this opportunity to thank EIB NETWORK for the amazing journey. Thanks to you fans and listeners of #DUVET and #StarrDRIVE. The team at @starr1035fm & @ghonetv and of course the Emperor himself @bolarayofficial. Wishing the whole company all the best for the future. God bless us all”.

Giovanni began his media career with Radio Universe during his University days.