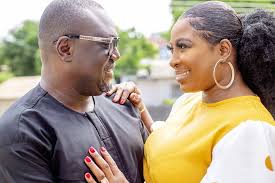 Ghanaian movie producer and broadcaster, Ola Michaels, has condemned the stunt pulled by Gloria Sarfo and Mikki Osei Berko, to promote an upcoming movie ‘Corona life’ describing it as ‘“most stupid thing”.

The two, had posted pictures of themselves together and gave captions that suggested that they were planning on getting married. It was later revealed this was a ruse to promote their new movie.

Commenting on the move, Ola Michaels said although there are no rules to guide how movie promotion is done, he will never approve of the use of fake stories.

Responding to questions on whether the stunt could affect the brand of the producer, Ola Michaels described their action as ‘stupid’ if neither of them were producing the movie.

“If one or both of them are not the producers, then I’m sorry to say, this is one of the most stupid things I’ve seen people do to promote a movie. I’m sorry but there’s no other convenient word to use here. Because, Gloria posted, Mikki also posted. There were called on Saturday on Peace FM and Gloria confirmed that even as we talked, she is in the house of Mikki. You go to all these extent and you come out to say it was a hype for a movie? Come on, that is very stupid. I don’t know who is producing it an like I’m saying, maybe the two of them are producing it so they feel they can use their image or put their integrity on the ground for people to trample on it.

Ola Michaels also said revenue to be generated from the movie will be negatively affected because they promoted with falsehood.

“Why I’m I interested in watching something you used lies to promote. We have seen it in our industry several times. Most of the time, 70 out of 100, the movies don’t do well,”