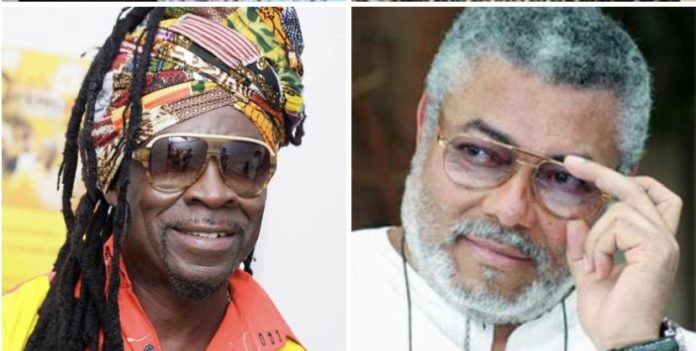 Speaking on Simply Showbiz on Tv3 with MzGee, the iconic singer describes the late former head of state as a humble human being despite his position in the society. According to him, he was once on the same flight to the UK with the late Rawlings and the conduct of the former president astonished everyone on the flight.

This, he believes made the late President act just like an ordinary citizen.

“…I remember I was with him on the same flight to the UKduring President Kuffour’s regime. We arrived at Heathrow and he had on his carry-on bag and the Nigerians who were with us on the flight were astonished that an African leader will be so humble because they know what they are used to in their country.”

He continued to express his awe of the late former President’s choice of sharing a flight with them and not a state aircraft with an entourage. The singer being wowed by this act, describedRawlings as not just a President who wore suits and gave speeches but brought himself down to be part of the masses.!

“…for me, he was a leader who led by example. He was a leader who was one of us. He could go down into the gutters to dig out as an example to show that being a leader doesn’t mean being in suits and giving speeches only.” He asserted.