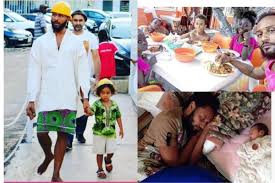 Maverick Ghanaian-Romanian Musician Wanlov the Kubolor has revealed that despite having seven children with five women, he is still being pressured with request from different countries to have more children.

Speaking to Jay Foley on JoyPrime, he said “i have a list of countries where they have been requesting for children from me”

But when asked whether he intends to add more children to the existing seven, Wanlov responded ” I didnt plan to add half of them, so i dont know whats gonna happen”

What he can however say for sure is that he wont marry again since he has been trying to dissolve his first one for almost a decade now.

Wanlov also disclosed that he still wants to be a Pilot, which was his first ambition as a child.

‘I still want to be a Pilot, helicopter Pilot”

This dream did not materialize because he “discovered computers” which took the love away.

But the only impediment obstructing his vision to be a Pilot now is “Money” as he is hopeful that when he has gotten enough cash he will go back to school and may be one day build his own helicopter.