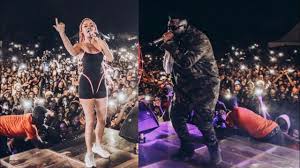 Deborah Vanessa Owusu Bonsu popularly known in showbiz Circles as Sister Derby says she will not turn down an invitation to work with her ex-boyfriend Medikal on a project.

Sister Derby dated Medikal for over two years before their relationship ended. This saw the rapper start a new relationship and finally marrying  Fella Makafui.

The Ghanaian songstress is on record to have said in 2019 that she broke up with Medikal after she heard rumours about him cheating on her.

There has been many speculations about her relationship with Rapper Medikal and his Wife. When She released the Single, Sweet Ex, there was a veiled but largely poor response from Fella Makafui.

But when asked in an interview with Jay Foley on JoyPrime she said despite the fact that she has not been speaking to Medikal for sometime now she is still open to work with him.

” Its fine, but we dont talk! For collaboration, why not, “s3 eye adwuma”! But May be somebody will beat somebody”. She jokingly added.

Sister Derby has also been talking about what prompted the decision to do the ‘Sweet Ex” song saying  “my laptop was there and there was a picture on it so i told my brother i was going to post it and say happy birthday my sweet ex, and he burst out laughing, cuz it was funny, it wasnt even like a plan the whole day i wasnt even on my phone, when i checked my phone in the night people were like are you not going to wish him, so i just felt like doing something funny”.