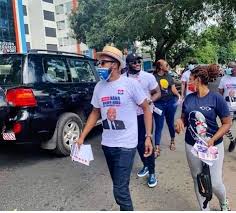 Ghanaian comic actor Kalybos has opened up about his security after Bibi Bright’s auto burglary at a restaurant off the Wisconsin University road in Accra.

Speaking to MzGee on TV3’s Simply Showbiz, the actor disclosed that he was very worried about his safety after Bibi Bright shared the incident in a social media group which forced him to abandon his car temporarily and use public transport.

“I am worried very about my safety. We belong to the same group who campaigned for the NPP, she first shared the picture in the group while I was driving. I instantly parked my car at a fuel station and took an Uber home.”

According to Kalybos, he is very concerned about the incident because it is proof that all the celebrities who campaigned for the New Patriotic Party risked being attacked.

“I had to park my car because I couldn’t be sure of my environment anymore. She said vividly, and with a twinkle of an eye, it can happen to me as well.” He explained

This is despite the fact that Bibi Bright herself has dismissed claims of a coordinated partisan attack on her.