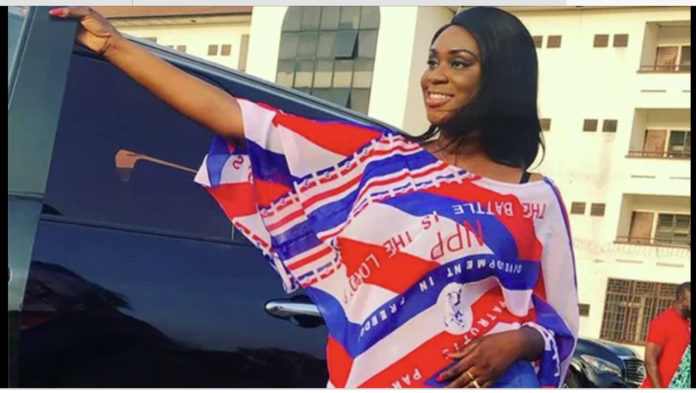 Ghanaian actress Bibi Bright has disputed claims that her life is in danger after her car was broken into by two unknown youth allegedly wearing NDC shirts at a restaurant around Wisconsin University in Accra.

Speaking to MzGee on 3fm, Bibi also refused to disclose the name of the restaurant insisting it may affect their business.

“My friend did not want me to speak about it because she is scared that someone might think her restaurant is not safe, but I have to make it clear that it Is not a place someone would come and would not want to park their car but it is off main Wisconsin road.”

According to her, it is likely that the culprits were not members of the NDC because, during election years, political parties distribute their T-shirts across and one person can own all the shirts of the various parties.

“I did not call the police, I called a couple of my seniors and I just got my car fixed now. To tell you the truth, I don’t think my life is threatened, I had people commenting on my post and there is one thing I picked and it was true, during campaigns T-shirts were given to the boys and girls, some people would have all the shirts of the party. I don’t think that they are NDC members, it just unfortunate, they wore the NDC shirts to do that.” she said

However, the filmmaker debunked the assertion that the action is likely to be perpetrated by her colleagues who are envious of her successes after joining the NPP.

“I have friends in the various political parties and I don’t think someone wants to harm me.” She added