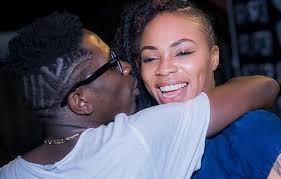 Shatta Michy has responded to criticisms against her by her baby daddy, Shatta Wale.

In a series of posts on Snapchat, the mother of one slammed her ex fiancee, Shatta Wale for accusing her of living recklessly by throwing a birthday party in the club.

In a recent interview on Joy FM, the ‘Gringo’ hitmaker said he tried to transform Michy from a random girl to a corporate woman to no avail.

“My relationship with Shatta Michy was looking so nice in everybody’s eyes but sometimes people should also watch me from afar and see if I’m going down or I’m moving up with this Shatta Michy issue,” he said.

“You see…it’s her birthday today and she is having a party in a club, a woman I wanted to put in the corporate world…,” he added.

In a swift rebuttal, Shatta Michy took to Snapchat to defend her choice of birthday venue.

“And to the people that say I’m empowering women & I shouldn’t be in the club, listen any young girl who looks up to me knows I’ve been working nonstop since the beginning of this year, in fact I’ve handled my battles beautifully.

She added, ”And I deserve to party as hard as I work. I might not be perfect one, all prim and proper but at least I am MYSELF, I don’t fake sh*t.”