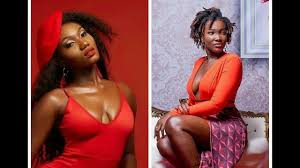 Ghanaian musician Wendy Shay has revealed that she received death threats from people who thought she had come into the music industry to replace Ebony.

According to her, although the timing of her introduction into the music scene may  lead one to conclude that she was taking over from Ebony, it was a mere coincidence.

In an interview on 3FM’s Urban Blend on Friday, Wendy Shay disclosed that she was being mentored by Ebony and her official announcement and Rufftown Records new signee was just a matter of time.

In fact, she says Ebony inspired her to come into the country and work with Bullet’s Rufftown Records.

At the announcement ceremony, Bullet was certain that she would be as big as Ebony Reigns had become in the industry before her tragic death.

Wendy Shay, when asked on Thursday whether she felt pressured to live up to the hype, she answered in the affirmative but added that it was God’s making and it has helped her grow.

“I would say that God actually put me in that situation or under that circumstance to become the woman that I am today. To talk about pressure, yes, to some kind of it because you know the yardstick and the millage that Ebony put Rufftown Records to and the women fraternity, she was the queen. and when she died, I was there, I got the chance to meet her. She was grooming me and so I would have been signed on the label anyway but then it was a coincidence.” she said.

On how she felt when addressed as Ebony’s replacement, the ‘Uber Driver’ singer noted that it was harsh for her, especially as it was never that plan that she takes Ebony’s place.

Wendy Shay further narrated how she received threats from people over such an assumption.

Before I even released my first song, immediately Bullet introduced me on the stage, the next day, I started getting death threat messages. They are going to kill me. People write into my dm ‘I know where you live. We are coming to kill you because you want to take Ebony’s place and you can never be like the Queen.

She further mentioned that key players in the music industry doubted that she could make a positive impact and attempted to discourage Bullet from continuing to work with her.

Before Bullet brought my first song out, he has these people that he goes to for advice and he took me there and they are big people in the industry. Industry players that Bullet looks up to and when we got there, he was like ‘Bullet forget it, it’s not going to work. Invest your money into something different’ in my face. And he turned to me and he was like ‘Young lady, I’m not trying to discourage you but you won’t make it. Forget it’