After losing his parents at infancy, the ‘Nothing I Get’ hitmaker has revealed he had to collect the waste from his neighbours in a wheelbarrow to make ends meet.

Fameye explained to MzGee on “Just Being Us” life became tough after he left his very caring grandmother to live with another family member and her immediate family.

While he was not discounting the dignity of hardwork he felt he was being overburdened with house chores when his guardian’s could have helped.

Fameye also stated that recollecting these events always brought tears into his eyes.

Watch the rest of his humble beginning here 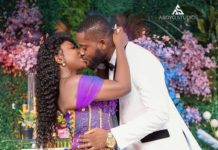