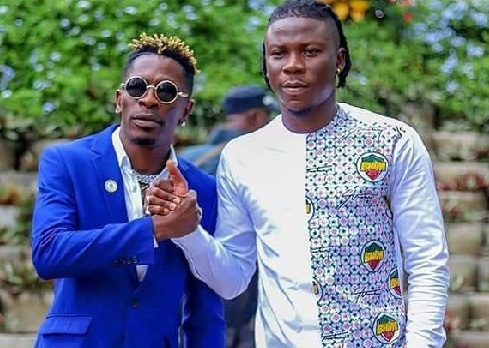 Prolific dancehall artiste Stonebwoy is questioning the decision by organisers of  Vodafone Ghana Music Awards (VGMA) Charter House, to lift the ban on himself and Shatta wale without hearing from them first.

The board of the Vodafone Ghana Music Awards (VGMA) finally lifted the ban placed on the two celebrated dancehall kings in 2019.

The ban was imposed following a brawl that ensued between the two artistes at the 20th edition of VGMA. The two were barred from filing nominations in the following year’s edition.

In a press statement, the board said it had decided to reinstate the two artistes to fill for nominations at the 22nd VGMA Awards celebration.

“The Board of the Vodafone Ghana Music Awards (VGMA) has lifted the ban imposed on Ghanaian artistes, Shatta Wale and Stonebwoy. This decision was taken at the inaugural meeting of the 22nd VGMA Board on January 28, 2021.

“The indefinite ban was imposed in 2019 as a result of a brawl caused by the two artistes during the Awards Ceremony of the 20th Anniversary edition of the VGMA, which disrupted the ceremony and threatened the safety of patrons. The two were thus excluded from participating in the 21st VGMA held in 2020,” the statement said.

“The board agreed to admit them back to the scheme, hoping that such altercations that bring the scheme into disrepute, do not occur in future events. This makes them eligible to participate in this and subsequent editions of the VGMA if they so desire. By extension, their collaborative works with other artistes are eligible for participation in the VGMA,” it added.

Since then, there have been mixed reactions to the news and discussions among industry players have not stopped. Some industry players say there is more than meets the eye and Charterhouse has questions to answer on its decision, especially when the two are still before the court on the incident that triggered their ban.

Well, the artistes themselves have been raising issues with the decision.
Shatta wale is believed to have hinted he is not interested in the awards.

On his part Stonebwoy is not excited the decision to remove the ban and issue a statement to that effect without consulting the affected artiste on Twitter.
“Dear VGMA Board & Scheme organisers,I hear the purpose of the VGMA is to celebrate and project Ghanaian musicians and music.If that is so, it takes nothing from you to meet with us the artistes/ our reps b4 reaching decisions that affect us and communicating them to the public.”

Invoking one of the oldest principles of natural justice which highlights ones right to be heard he further tweeted:

“The right to be heard is a principle that applies in every noble society. Even the all seeing God, who had already seen and knew all that Adam and Eve did in the Garden of Eden, still made sure he heard them before he took action against them. #IfTheySoDesire really???