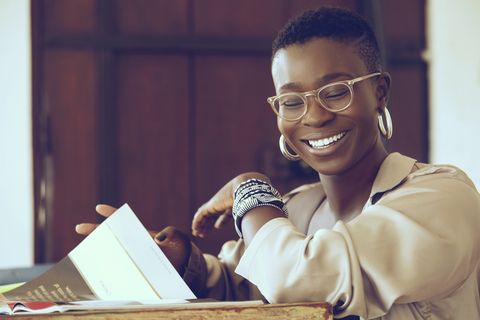 On Friday, July 31, Beyoncé did it again. She broke the internet, dominated the conversation and drew the attention of the world by releasing a project so unique and groundbreaking that its only competitor, really, was her previous body of work.

There’s a lot to celebrate in her latest offering, feature film Black Is King. There’s the music (the film serves as a visual accompaniment to last year’s album The Gift), the fashion – Beyoncé wears everything from custom Valentino to African designers like the Ivory Coast’s Loza Maleombho, the beauty looks featuring exquisite braids, and the cameos: Naomi Campbell, Lupita Nyong’o, Adut Akech and Beyoncé’s own family, her daughters Blue and Rumi, husband Jay-Z and mother Tina Knowles.

But overall, the key themes are representation and Black excellence. The Gift, which coincided with the 2019 remake of The Lion King, where Beyoncé voiced the part of Nala, paid homage to Africa and features artists from the continent including Nigeria’s Burna Boy, South Africa’s Busiswa and Ghana’s Shatta Wale.

Filmed over the course of a year, the ‘labour of love’ project (as described by Beyoncé) was shot in various locations from New York to London for the modern day human retelling of The Lion King but also returned to the continent, shooting in Ghana, Nigeria and South Africa.

Featured at several points over the film, Ghana was the primary location for the rousing and expertly choreographed ‘Already’ music video section of the film – which features the country’s native Shatta Wale.

Among the many, many names on the credits, the producer responsible for the Ghana part of the film is Sharifah Issaka, an Accra-based and native Ghanaian producer who co-ordinated the logistics and worked with the talent to bring to life Beyonce’s vision.

In an interview with Elle UK, Sharifah explained how timely ‘black is king’ was saying:

‘I’m in Ghana right now, but I did live in New York for two years which coincided with the start of the Black Lives Matter movement. It was so upsetting then to see the lack of interest from those outside of the affected community. I hope that times have changed and it’s not just performative, but now the world is at least listening to what Black people have to say. This is the time to release something like Black Is King because this project is so Black on every level, from production to the talent to the fashion. It’s a celebration of Blackness.

When Beyoncé started this, she didn’t know you know what the world was going to be like in July, 2020. But, it didn’t matter, because she knew she wanted to talk about Blackness; she knew she wanted to imbue a sense of pride in Black people and connect the Diaspora to the Motherland in a way that hadn’t been done before. It needed to be done and the timing is divine.”