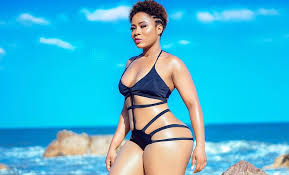 Actress Kisa Gbekle has dismissed rumours that her recent plastic surgery is not her first one.

According to her she did not have the needed cash to do it previously and so could not have done so.

She then revealed that contrary to the prevailing situation she has never dated a sugar daddy who could have funded her previous alleged body sculpture surgery.

Setting the records straight on her dating life she stated that she has not even dated someone over 35 before regardless of whether they are wealthy or not.

The Actress also claimed that rumours about her dating an American were false since she stayed with her brother on her recent sojourn there. Watch full interview here