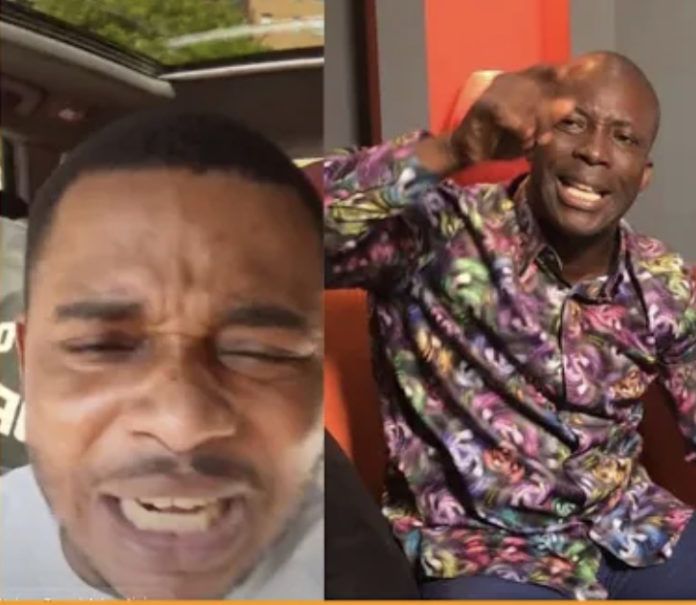 Kumchacha believes the reality which needs urgent attention for better development and progress of all Ghanaians is what Twene Jonas is on the mission for, fighting those at the helm of affairs to make it a reality.

Speaking on the ‘Best Entertainment Show’ on Okay FM Monday morning hosted by Halifax Ansah-Addo, Kumchacha said Twene was saying what is on the minds of many Ghanaians.

“The only issue I have with Twene Jonas criticism is about the insult. He mentions direct names in the insult – his insult can also amount to defamation of character. Mentioning people’s names direct attach to insults is against the law and bible also tells me to respect the elderly. My mum told me to respect persons in age difference ahead of me – anybody older than you deserves respect and necessary accord. It becomes a curse if you disrespect them. Ephesians 6:1 teaches us to also respect our mother and father. Whatever Twene Jonas is doing is 100 percent correct but the continuous insults becomes the worry. His words are not fake.”

“The country is heading towards destruction. The ‘antoa nyamaas’ are not functioning again. The river Densu has become tea, how can it curse someone? It was those days that the water was functioning in its purpose but currently it wants to damage even some of the traditional chiefs. They’ve degraded the water so using it for spiritual purpose is of no value now. What Twene Jonas is expressing are all true except the insults. Last week, somewhere in Koforidua, fire service attended to a fire disaster in a taxi. I support all the criticisms from Twene Jonas on our leaders because the Asantehene himself alluded to the fact; about 30 percent of the chiefs around him know the brains behind the galamsey degrading our water bodies.”

He added, “The truth can be found in this country but speaking about it is the issue. A young guy would be jailed for attempting to practice illegal mining; meanwhile some of our leaders, Ministers, MPs among others are into the practice with no sanction mounted on them. A Chinese was arrested for her duty in the illegal business but a certain senior Minister made her go unpunished for his selfish gains. God is about to punish some of our leaders severally. Others too will be diagnosed with sickness that has no solution because of their wicked ways towards the country. The system is not working as expected. God is angry with some of our leaders”.

His commendation comes after Twene Jonas became the trending topic on social media for the past months and mostly bloggers have tapped into the discussion to throw more light on the man who is ‘fighting’ for Ghanaians abroad.

Main name Tweneboah Jonas after getting the opportunity to travel to the United States, started filming himself to talk about his daily life compared to his homeland, Ghana.

He has since talked about topical issues where he lambasts leaders in Ghana for failing the youth because the system is working where he is compared to Ghana.

The young man has preached on transportation, poor healthcare, and higher taxes among others he claims leaders could easily fix but are apathetic to such concerns which will transform the standards of lives of people.

Some people have lauded him for telling the truth but others believe he should voice out his sentiments without throwing insults at leaders.