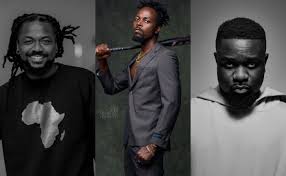 Rapper Emmanuel Botchwey known as Kwaw Kese has thrown down the gauntlet on his accusation that fellow musicians Samini and Sarkodie have been paid to support the incumbent government’s re-election bid.

These allegations were first raised in a tweet, then he did a live video to repeat same after they refused to respond, Kwaw Kese finally composed a song decrying their activities.

The crux of his complaint is that his colleaques, who have becomes poodles of the government, are largely to blame for the woes of the music industry since they appear to be dining with the same politicians who have abandoned their industry.

The awkward silence from the accused have made some come to the conclusion that they are ignoring him and treating his claims as falsehood.

But Kwaw Kese is taking this issue a notch higher by challenging them to a lie detector test, not with modern chemical interrogation skills, but with the age-old contest before two very powerful deities in Ghana: ‘Antoa’ and ‘Nogokpo’.

“I know they would come to disapprove of my findings of they receiving monies from the government. I challenge them to swear by the African deities ‘Antoa’ and ‘Nogokpo’ if they deny accepting any payments from the politicians.” He spoke in an interview with MzGee on 3fm.

The rapper, then disabused the minds of people about his motivation for this pursuit.

“I don’t hate or envy my colleagues, I just want them to come together and call for a better industry where we would all from our hard work.” He said