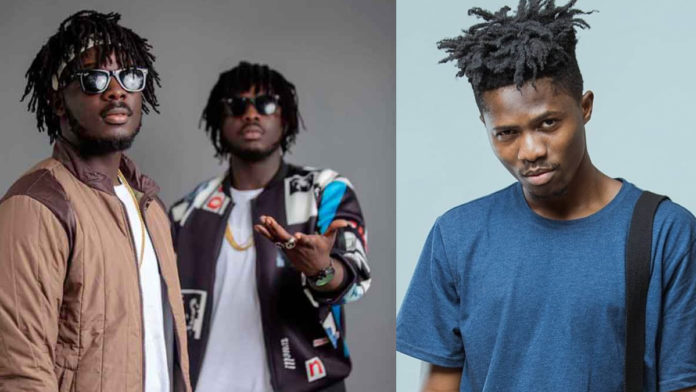 Ghanaian music star, Kwesi Arthur has said he is unsure of his reaction if he meets music duo, Dope Nation.

The ‘Anthem’ hitmaker noted that the deed by DopeNation was to stir up negative energy.

DopeNation late 2019 recorded a diss song targeted at rapper Kwesi Arthur, which was allegedly leaked from their camp.

In the song, titled ‘Chairman’, the ‘Zanku’ hitmakers revealed that they were disrespected by Kwesi Arthur and his team at a show in Ghana Telecom University College, Accra.

In a conversation with MzGee on Showbuzz, the BET awards nominee noted that he is unsure of his reaction should he meet the music duo of identical twin brothers.

” I’ll just go my way. For now, I actually don’t know how I’ll react when I meet them. I’m not really bothered by the diss track but I felt they could have called me and we would have discussed the issue but they went on to record a diss song instead.” The Grind Day hitmaker noted

“I don’t think I’ll retaliate the diss song. I feel like its negative energy. Even with the whole situation, I feel like there was a lot of negativity involved and I don’t want to fuel it because its irrelevant.” He explained

Kwesi Arthur further noted that he disagrees that the music industry in not united.