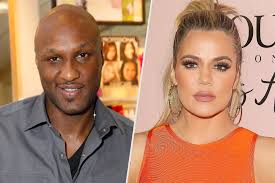 Former NBA star, Lamar Odom has admitted to threatening to kill Khloe Kardashian when they were married.

Lamar made this revelation in his new memoir titled, “Darkness to Light”.

According to him, he was upset Khloe called his friends for help when he started hallucinating so they got into a fight and he threatened to kill her.

He writes: “Khloé came down and knocked on the door. I opened it suddenly and grabbed her forcefully by the shoulders, which frightened her. ‘What the f–k are you doing?’ I screamed, out of my mind. ‘You trying to embarrass me in front of my friends? I’ll f–king kill you! You don’t know what I’m capable of!'”

Lamar admitted he was just frustrated and later apologized to Khloe and asked for forgiveness.