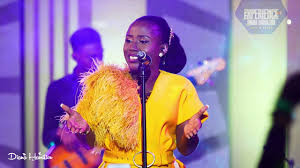 Ghanaian gospel artiste, Diana Antwi Hamilton, says Billboard’s list of Ghanaian musicians whose content on Youtube gained a lot of views in 2019 should not give cause enmity and rivalry among industry players.

She encouraged other musicians who did not make the list not to worry since the rating is the barometer to determine how hard they are working.

This week, the internationally acclaimed music magazine released a list, dubbed ‘The most-watched homegrown artists across Africa’ and sought to unearth the top five artistes in 2019.

The 2019 VGMA Gospel Artiste of the Year, when interviewed by MzGee on 3FM’s Showbuzz said she does not set out to compete in the industry, hence, her call on others should to do same.

“When I’m writing a song, it’s never ‘Father let me sing to win an award. It’s Father let me sing so that people are blessed’ and whilst I’m doing that, God is talking care of the other things as well. And so, there shouldn’t be a competition. People shouldn’t feel left out. I think that everybody is working. The sky is a huge place and all the stars have places to stand. I never set out to compete and I don’t think anyone should set out to compete.

When asked what she was doing differently that was helping her thrive in the music industry, the ‘Mo Ne Yo’ singer gave credit to her management team.

“What we have done and keep on doing is having a great system around me and there’s always the God part which is the fact that I depend on God. I work hard, I trust him and I believe him to take the lead. I have a system around me that works. Whilst I major on the ministry, I have a management that takes care of the industry aspect of things,” she stated.