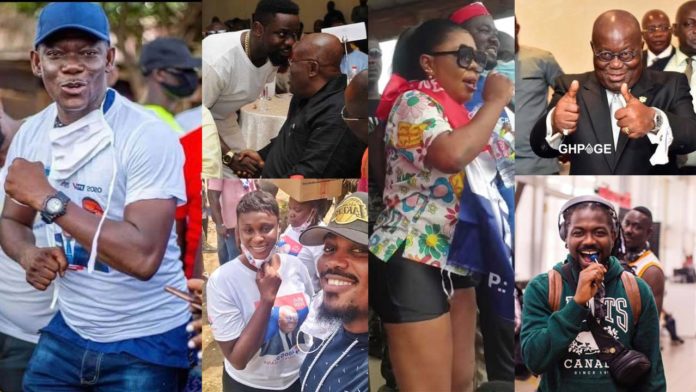 Despite the caution from the Opposition NDC’s Flagbearer, John Mahama, warning celebrities and other players in the creative industry against open declaration of support for political parties in this election, it has emerged that over 30 of them have endorsed the governing New Patriotic Party (NPP) for another term.

Political endorsements have a long and rich history in politics, in the USA for example it dates back to the early 20th century.

In Ghana however, overt endorsements have been a fairly new phenomenon.

With a little over a month to the December 7 polls, the 11 political parties and the independent candidate are criss-crossing the length and breadth of the nation in an attempt to secure votes using all available means including celebrities and those in the creative arts.

But the incumbent NPP seems to be taking celebrity endorsements a notch higher in this year’s elections with over 30 creative people throwing their weight behind the Elephant party, reminiscent of what happened in 2008.

In a post on Facebook, respected music producer, Fred Kyei Mensah popularly known as Fredyma penned down a list of creative people who have endorsed the Akufo Addo led government.The list is reproduced below:

“CREATIVE PEOPLE:We all endorse Nana Addo Dankwa Akufo-Addo as the President”
1.Nana Ampadu
2.Daddy Lumba
3. Dada KD
4. Dada Hafco
5. Kaakyire Kwame Appiah
6. Sarkodie
7. Samini
8. Omane Acheampong
9. Great Ampong
10. Diana Asamoah
11. Cyndy Thompson
12. Fred Kyei Mensah
13. Appietus Appiah Dankwah
14. Wei Ye Oteng
15. Qwesi Oteng
16. Yaw Labito
17. Antwi ne Antwi
18. Pasco
19. K Bibini Gh
20. Bob Smith
21. Obuor
22. Prince Yawson(Waakye)
23. Socrate Safo
24. Helen Godschild
25. Ernest Kwasi
26. Eduwordzi
27. Cartel Bigj Praye
28. Matilda Asare
29. C-Zar
30. Danny Abab’
Well, Identifying the effects of political endorsements has historically been difficult. Although there have been no empirical estimates of these endorsements on political outcomes, it is clear that celebrities have the ability to influence the behavior of their fans in other arenas. For example, celebrities are routinely paid to endorse products because it increases perceptions of quality and sales.
It is however unclear whether this ability to influence consumers translates to voting decisions but one can surmise that those who court these supports believe that if signals of quality can be effective in settings where the endorser is paid, then they might also be effective in the political realm where the endorser may or may not be paid. That-notwithstanding it may also backfire especially if the endorsement is procured which is increasingly becoming the case in Ghana.