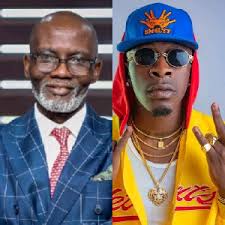 leading Member of the governing New Patriotic Party and President Akufo Addo’s cousin Gabby Asare Otchere-Darko is singing the Praises of Dancehall Artist Shatta Wale for his “exemplary” conduct during the period of the Corona Virus Pandemic.

He took to Twitter to express his admiration for the “apparent growing maturity’ of Shatta Wale” who he says he has been monitoring for sometime.

Gabby is convinced Shatta Wale is not only mindful of “his influence on young people” but he is also “determined to exploit it for positivity’.

He singled out  Shatta Wale’s ‘actions and messages in this Covid-19 period” for commendation  describing it as “exemplary”.

In response, the obviously elated Dancehall Artist tweeted “Thank you sir, coming from you means a lot to me and the whole shatta movement”!

Well, at the peak of the pandemic government expressed the need to get artiste to be at the forefront of the education drive. Information minister, Kojo Oppong Nkrumah then officially announced government’s intention to engage celebrities in the fight as ambassadors with no intention to pay them.

But some of these celebrities dismissed this approach insisting they will not do it for free. In an interview with MzGee on Tv3 NewDay, Shatta Wale for example served a notice he will not avail himself for the task if there will not be any financial gratification.

“They’re working and they’re getting paid… They’re charging us with taxes here and there and we understand. Our royalties are not getting to us so we’re not even making that kind of money that we have to make; so if government wants to engage me, Stonebwoy, Sarkodie or any other, they should know that there is something that needs to be done. It’s a tradition.

“We can’t come out and say we’re going to do it for free. I’m not part of their political party. It’s best for them to put a package down. Doing it for free will be very hard for someone like me’. He stressed.

Shatta Wale, however made history, by delivering a stunning virtual concert for the first time from his home. Dubbed ”Faith Concert”, Shatta Wale stunned his critics by delivering stripped-down rendition of live band performance streamed across various digital platforms that lasted for almost two hours.