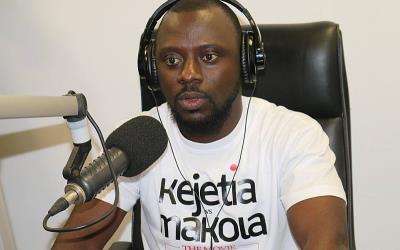 Comic Actor, Richmond Xavier Amoakoh widely known as Lawyer Nti of Kejetia Vs Makola fame has argued that men will find ways to cheat even women are shared equally.

Speaking on a panel discussion on the ‘Gee Spot’ hosted by MzGee, Lawyer Nti explained that

” Even if there are 10 women in the world and 3 men and its shared equally among the men, we’ll still find the way to go for someone’s woman. Men will always find a way to cheat.” he explained

He indicated that he disagrees with the notion that men are supposed to cheat hence its normal for men to be involved with more than one woman.

According to him, although men cheat the act should not be seen as normal.

Lawyer Nti joined other panelists including rappers Kofi Mole, Eno Barony and 2018 winner of Ghana’s Most Beautiful Abena as they shared their perspective on the topic of whether the cheating nature of men should be accepted by society.