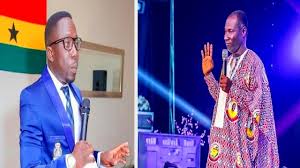 Mr Beautiful fell from Grace in Kumawood, when he openly declared his support for the then governing National Democratic Congress (NDC) and went ahead to campaign vigorously for its presidential candidate, John Dramani Mahama in 2012 and 2016, who was also president at the time.

He has since not landed any roles from the staunch New Patriotic Party-loyal producers and directors of Kumawood, crushing his once ‘Beautiful’ career.

Clement Bonney is however not alone; other Kumawood actors who openly campaigned for Mr Mahama are also struggling to land roles in Kumawood. Popular actors like Michael Afranie, Tracy Boakye, Sylvester Agyapong, Asare-Bediako and Bill Asamoah have virtually become persona non-grata in Kumawood.

But speaking to Mzgee on Showbiz927, Socrates Sarfo said Mr. appeared to have found a new calling in following Popular Sakumono based Pastor Prophet Emmanuel Badu Kobi, making him unavailable for movie roles.

“He was busy following Pastor Badu Kobi. If he wasn’t getting movie to shoot, it’s not because he was NPP or NDC. He started losing it way before politics. He was busy with the pastor. Anytime you need him, he is in Accra but before then he was in Kumasi busily shooting…mind you, after the microphone, we all meet and talk. The truth is, no one boycotted Mr. Beautiful, and he is another fine artist we have when it comes to films.”