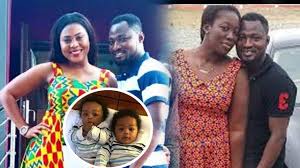 Comedian Benson Nana Yaw Oduro Boateng, popularly known as Funny Face, says he is yet to take custody of his twins after a month since his estranged girlfriend abandoned him.

Funny Face, whilst in a ‘dirty fight’ with actor Kwadwo Nkansah ‘lilwin’ alleged that the mother of his twins was conspiring with the Kumawood Actor to run him down.

Just when many thought the dust was settling on the matter due to his long silence, Funny Face disclosed in an interview on 3FM’s Sunrise with Alfred Ocansey, that eventhough he has done everything humanly possible all his efforts have proved futile.

Funny Face, however, says things have slightly improved as he now knows the whereabouts of the children and occasionally is able to contact them.

They [the twins] are with their mum. Their mum took them away. Plenty issues that I don’t want to delve deep into it. I went to town, I came back and she was not home with the kids. You know, everybody has problems when it comes to marriage…I don’t want to talk about her. I don’t want to give her credence because of my children. Iwant to give them that respect

He says that he has gone for another woman who is endowed from behind.

According him, he is addicted to such type of women and nothing can change that.