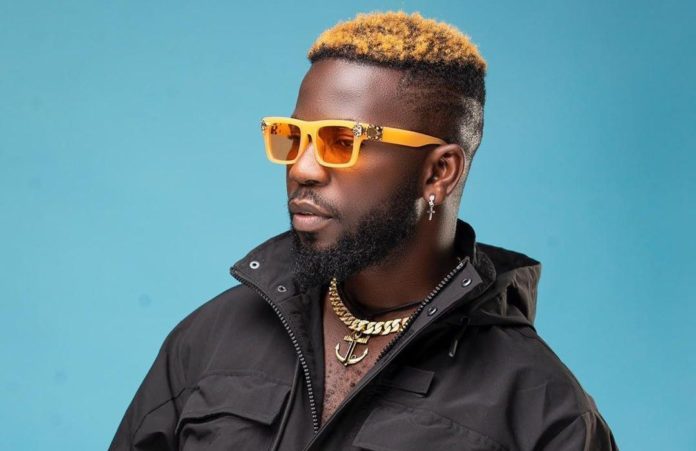 High-life artist Bisa Kdei has apologised for his tweet which sort to accuse sections of the Ghanaian media of taking money to undermine his career.

He tweeted “the Media is fake” in response to a fan during an engagement on Twitter.

In answering to a fan’s tweet regarding why his songs barely get airplay, the ‘Mansa’ hitmaker started by saying “It’s an agenda.  They have taken some money to do that. If you love my music keep loving it.  The media is fake #AskBisaKdei.” 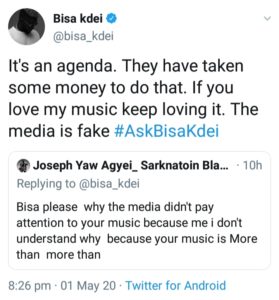 But following a massive backlash, he has now apologized for the tweet explaining it was his Personal Assistant who tweeted with his handle and that he did not approve of the entire tweet.

“I told him to tweet “yes some people in the media is fake,” but the part where he said somebody is being paid to not play the songs that wasn’t from me”.

He made this revelation in an interview on Hitz Fm.

When asked whether he queried the PA for misrepresenting him, this was his response:

“We did, we all did, which we are having a problem with because me I wouldn’t come out to tweet something like that. Andy you know me, if I will write something like that I will try and put it in a right order so I know I have people that support me, you how the industry is, you have the bad ones and the good ones”.

“I know no matter what [if you go up and down] still people are going to say [its alo, format] I’m lying but it’s the truth, that this is what happened…I didn’t talk about the money part, that’s something that is coming from him [Jay]… sometimes because you have a tough skin for these ‘kinda’ things doesn’t mean somebody else has it, until you put a task before them before you see that, this person can handle this kind of tension”.

The ‘Brother Brother’ hitmaker then issued an official apology asking those offended by the tweet to forgive him.

“it was a mistake that we are trying to rectify… if I offended some people I plead that you forgive me.” He said.