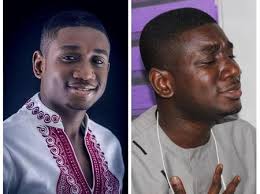 Imagine the Ghanaian gospel industry without one of its greats: Noble Nketiah. Imagine never hearing his hit songs like “S3 me tease”, “Meto”, “Barima Yesu” etc.

This it might sound inconceivable today that such a fine talent would not be with us, but it was actually considered three different times.

In an interview with MzGee, Noble Nketiah revealed that his mother tried to abort him on three occasions because his father left her when she was still pregnant with him.

Noble Nketia was born at Winneba in the Central Region. He is the fifth of eight children to his father, but the firstborn of three to his mother. The only child of the relationship between his Mom and Dad.