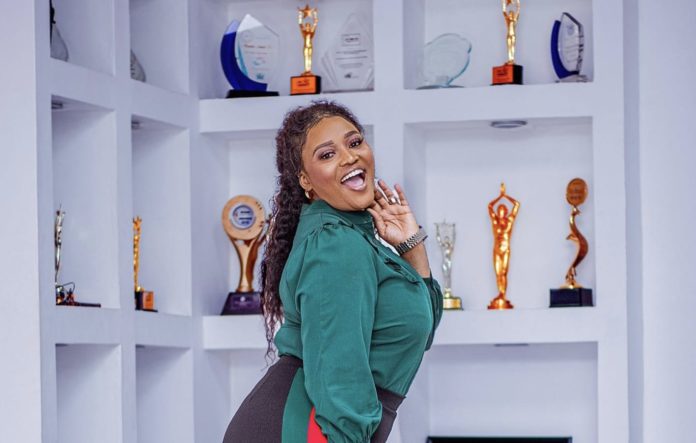 Gloria Akpene Nyarku popularly known as MzGee has been crowned The 2020/21 Radio and Television Personality Awards TV entertainment Presenter of the year.
She fended off competition from other female industry giants including UTV’s Nana Ama Mcbrown and Regina Van Helvert of GhONE to win her first RTP award despite being nominated several times.

In her acceptance speech, MzGee thanked all those who have contributed to her career development stressing the media organisations she has worked for all her life:

“Today God has shown his face finally i get to hold this(clutching the award), I am soo grateful to every media house that has given me their platform, all the way from eagle fm in Cape Coast to Oceans TV here, Hitz fm, JoyNews, the multimedia platforms”. She then singled-out Media General for exceptional praise saying “ it was a beautiful time with you, enough space and i am sure that is what got me this.”

MzGee further said it was a “new beginning” and that she is convinced “God is about to do great things” in her life.

Her award comes after the masterful display as host of the Red Carpet session of the show.

The night saw many others win coveted awards with the Overall Radio and Television Personality of the year going to Okay Fm’s Abeiku Santana!

Radio Development Programme of the Year

Graphic of the year – Daily graphic

Online portal of the year – Peacefmonline

Television Morning Programme of the Year

TV Discovery of the Year

TV Female Presenter of the Year

TV Male Newscaster of the Year

TV Cooking/Culinary Programme of the Year

Radio Morning Programme of the Year

TV Programme of the Year

Emerging TV Station of the Year

Newspaper of the Year

TV Development Programme of the Year

The show is currently ongoing so stay her

Media Group of the Year

Radio Entertainment Pundit of the Year

Radio Station of the Year

TV Station of the Year
UTV

This event which took place at Movenpick Hotel in Accra saw powerful performances from KK Fosu, Tinny, Nana Agyeman, Kwaku Darlington and others.