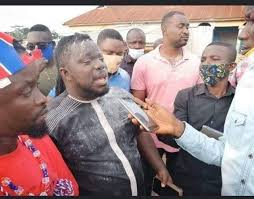 Artist Manager, George Britton believes that it was just a matter of hard luck that prevented the former president of the Musicians Union of Ghana, Bice Osei Kufour, popularly known as Obour, from being elected as the New Patriotic Party’s parliamentary candidate for the Asante Akyem South constituency in the Ashanti region.
Obour’s quest to represent the people of Asante Akyem South hit a snag as he failed to secure the ticket of the party to contest the upcoming parliamentary elections.
This certainly must have gladdened the hearts of his critics who mounted a massive campaign against him. This included Artistes such as Shatta Wale, Criss Waddle, Gyedu-Blay Ambolley and D-Black who accused Obour of mismanagement, calling on Ghanaians not to vote for him until he (Obour) accounted for his stewardship and how the finances of the union were managed.

Commenting on the outcome of the election on TV3 New Day, George Britton said that “this is Obour’s first time trying this. For him to be beaten by just 64 votes, that should tell you that the young brother did a very great job. This is his first time and he is actually challenging a sitting MP. Obour did well. He was just not fortunate to win”

Entertainment analyst, Arnold Asamoah Baidoo, who showed public support for Obour remarked that the outcome of the election was disappointing. He believes that lessons have been learnt and that they would work on bouncing back in 2024.

“The expectation was that he would win and probably give us some spotlight for those of us in the arts when he goes to parliament. He lost and so we only need to do our homework well and see the next four years.”
Obour was not the only person from the Creative Arts industry whose political ambition hit the rocks. Rapper Sarkodie’s former manager and chairman of 3Music Awards, James Korsah-Brown, who had touted reforms in the industry as part of his agenda, lost in his election. He garnered 255 votes, losing to the incumbent Mfantseman MP, Ekow Quansah Hayford, who won with 611 votes.