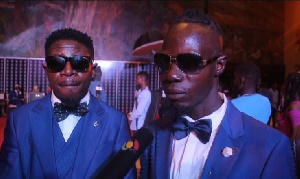 Kobby Culture, one half of popular 2000s, hiplife duo Akatakyie has vehemently rejected claims that he has a cunning resemblance to hiplife musician, Patapaa.

According to him, there are no similarities between him and the ‘One Corner’ hitmaker that will be enough to link them.

Real name, Prince Kwabena Budu Asumaning, the ‘Odo Asisi Me’ hitmaker made this known granted an interview to JoyNews’ Doreen Avio together with the second member of the group, Ebenezer Kwasi Okyere Asumaning, popularly known as King Pharoah.

” I’ve never ever been told there’s any resemblance with Patapaa. Patapaa has his face and I have mine. I don’t resemble Patapaa in anyway. Maybe its the hairstyle and because I’m slim and Patapaa is also slim that’s why someone will say so but I don’t think we do.” He said in an interview on Joy News‘Lets talk showbiz’

He added that: “ We don’t look alike. Even twins can’t be the same. I’m who I am and Patapaa is also who he is.”

The duo who had been on a long hiatus from music released two singles ‘Only Baba’ and ‘Ashawo’ in 2017.

According to the group, they are currently taking their time to release new music because they want to maintain their record of making classic songs.