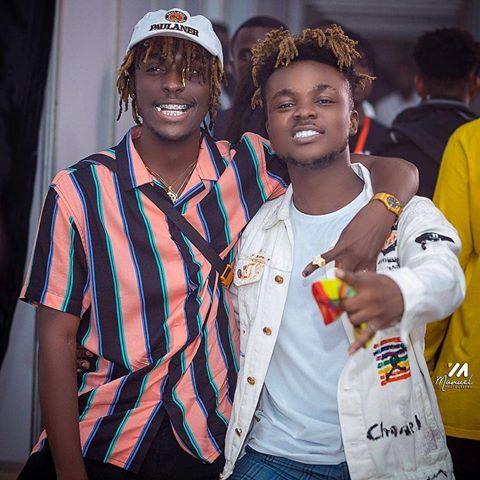 Budding rapper, Kofi Mole has said he is not gay despite referring to colleague musician, Quamina MP as his boo often.

The ‘Don’t be late’ hitmaker told Delay on ‘The Delay’ show that he has great affection for the ‘Amanfuor girls’ crooner.

He added that he doesn’t mind kissing him on his cheeks when they are leaving each others company after they spend some time together.

Speaking in local dialect, Twi, Kofi Mole said: ” Quamina (MP) is my boo. He’s someone I have great affection for.”

Asked by the host of the show if he intends marrying Quamina MP since he likes him, the ‘Aposo gangster’ answered in the negative.

“ Oh no. Two men can’t marry. I’m not sexually attracted to him but we do a lot of things like hugging. If I’m at his place and I’m leaving, I don’t mind giving him a kiss of his cheeks.” he said in Twi

Born Edward Kofi Agyemang Amoah, the rapper buttressed his claims that their relationship is strictly brotherly love by stating that Quamina MP can’t be gay because he’s a womanizer.