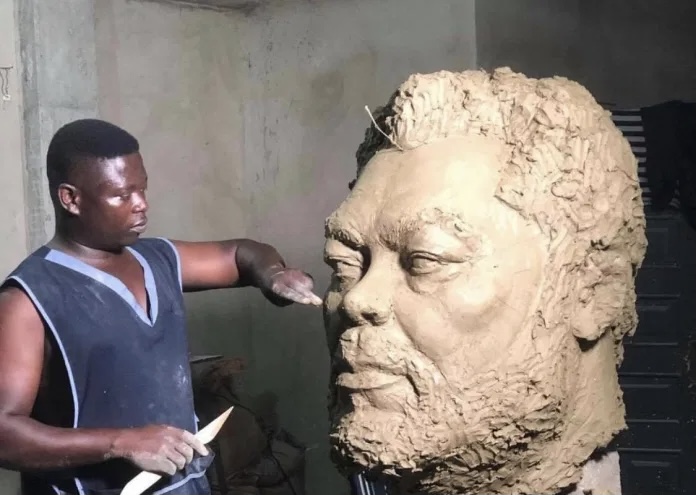 Kumasi-based talented sculptor, Samuel Kumi says it had always been his childhood dream to sculpt the late president, JJ Rawlings.

In an interview with MzGee, Samuel revealed his first drawing as a child was the late Rawlings using numbers back in his primary days in 1996.

He further reveals he saw late former head of state as a hero and it was a part of his plans for this year to sculpt and present to him as a gift. He says the news of his demise came as total shock to him.

“…when I was in the primary school in 1996, president JJ Rawlings was the first person I could draw. He was a hero and everybody loved to draw him. I remember using numbers to draw him [a formula used in capturing him with spectacles].”

“It had been my desire to sculpt him this year. Months ago, while traveling with a friend to Accra, I told him of my intention of sculpting president Rawlings.”

On the demise of the late president, he said he was shocked when the friend he had earlier discussed his intentions with broke the news to him.

“It was him who alerted me to put on my tv to see something. I was shocked.” Samuel said.

Although no family member of the late president has reached out to him yet at the time of the interview upon images of the sculpture going viral on social media, Samuel says he would love to present his finished work to them. This, he believes will serve the same purpose of his intention of presenting to the late president though he is no more.