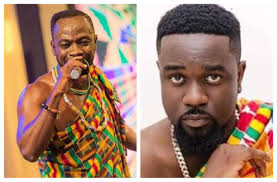 When asked, in an interview with MzGee on 3fm’s ShowBuzz,  who is currently doing well when it comes to Rap, Czar replied: “Sarkodie is on top of the rap game right now”.

Who wears the crown as Ghana’s best rapper is perhaps one of the most contentious issues in Ghana which can generate unending controversy and debate anyday. Even after receiving over 92 awards from 165 nominations, including 22 Ghana Music Awards, Sarkodie has had to battle the likes of Okyeame Kwame, Manifest, Obrafour and Lord Kenya for the top spot on any ranking of Best Rappers in Ghana.

Well, for Czar the die is cast and the crown belongs to Sarkodie!

He then proceeded to rank order Sarkodie over one of Ghana’s All-time greats, Okyeame Kwame, insisting ” Okyeame Kwame is on and off”.

According to the ‘Mercy Lokko’ hitmaker,” the difference between Sarkodie and Okyeame Kwame is that Okyeame tows the same line all the time, rhyming, rhyming, change gear blah blah, that kind of thing, if i were him, since he is still into music, he needs to change his style sometimes, Ghanaians easily get fed-up with the same thing, but Sarkodie, i wouldnt say he is more versatile but he is broad minded so he has more angles, appeals to a wider population and is more interesting”.

He also dismissed the claim that Consistently is very important in the arts and that its only musicians who are consistent that excel saying:

‘you have to be versatile, if you are static you become irrelevant, what made Shatta Wale great was that he was one way and in a corner people were familiar with and he changed to be the current Shatta Wale”.