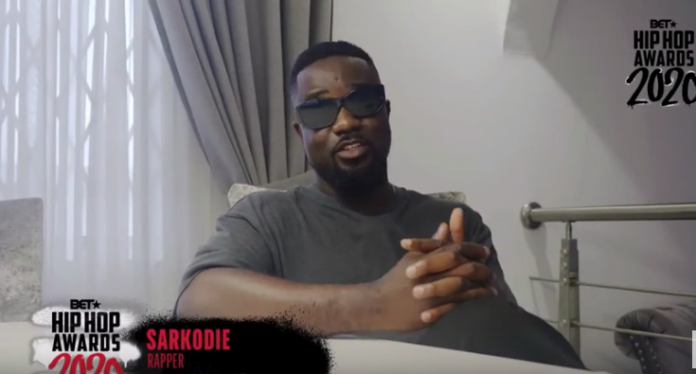 Prolific Rapper Michael Owusu Addo known within the showbiz fraternity as Sarkodie,
on the night of Tuesday 27th October 2020 was bestowed upon the singular honor to present the Best International Flow at the just ended BET HIP-HOP AWARDS 2020.
The Ghanaian rapper was the first to win this category after the category was created last
year to honor rappers across the world with distinct delivery, apt metaphor, and great lyrical
content. The category saw artists across Europe, African, and South America being nominated. UK rapper of Ghanaian descent Stormzy, Khaligraph Jones from Kenya, Ms Banks from the UK, Djonga from Brazil, Kaaris and Meryl from France, and Nasty C from South Africa were the nominees for this category.
The award was won by UK rapper of Ghanaian descent Stormzy, who is currently one of the hottest rappers in Europe and also one of the highly revered voices of Grime music ( a hybrid form of hip-hop). He has had an amazing year from churning out great projects like his recently released album “Heavy Is The Head” which dominated charts across the country with the lead single “Own It” featuring Burna Boy and Ed Sheeran being the hottest single across Europe in 2019.
This honor bestowed on Sarkodie makes him the first African based rapper to present a BET award.
He also holds the records as the most nominated African rapper at the BET and the most BET awards won by an Africa rapper with him winning two awards out of four nominations.