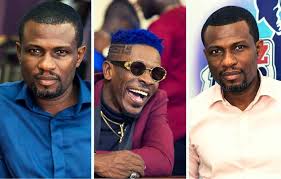 Chief Executive of Slip Entertainment, Mark Okraku Mantey, has criticized the quality of songs being churned out by recent Ghanaian musicians like Shatta Wale.

Making a comparison with the kind that were produced by the likes of Yaw Sarpong,  Okraku Mantey who doubles as the President of the Creative Arts Council, asserted that modern day Ghanaian songs were of poor quality.

Mark Okraku Mantey who is best known for producing the likes of Lord Kenya in the 90’s and early 2000’s  is also of the view that these modern day singers are only interested in making hit songs and not once that can be enjoyed several years later.

“…these people were going by the rules of the game. Everyone has an objective. Me, I want my songs to play when I am 60 or 70 years old. That is my pride. From the marketing orientation, they would also tell you to do the music and go and take your money. You don’t care about tomorrow. It’s about making the money, the Shatta Wale’s and all the guys,”

He made these remarks in an interview on Hitz FM.