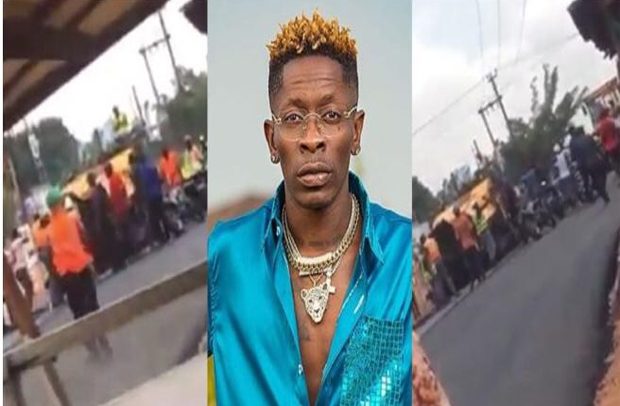 The divisional commander of the East legon Police Station, Mr. Kwame Gyasi has indicated that dancehall artiste Shatta Wale is under investigation for allegedly leading the attacks on road workers at Adjiringanor, East Legon in Accra.
This is despite the fact that  Shatta Wale has rendered an apology to the assaulted victim. In a trending video, Shatta Wale is heard expressing regrets for the unfortunate incident.

Shatta Wale was given an Ultimatum of 24 hours to report to the police or risk being arrested after a report by the contractor’s site manager Kennedy Acquah.

The contractor is also on record to have given Shatta Wale a 24 hour notice to render an unqualified apology.
It was believed that this apology will render moot the ongoing investigations into the matter.
But it appears the Police is treating the matter as a criminal one between the state and the musician which cannot be dismissed with a mere apology.

Whiles prosecution may be hampered by the lack of cooperation from the victim, the Police can still proceed to trial if it gathers enough evidence to back which ever charge it is likely to drag the dancehall artiste to court for.