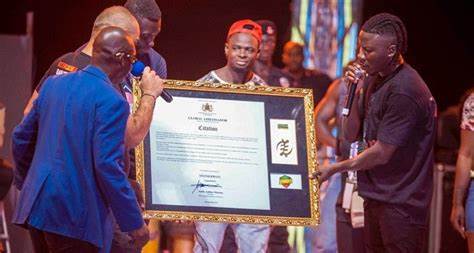 Multiple award winning Ghanaian reggae/dancehall star, Stonebwoy, is embarking on a sanitation campaign in Ashaiman as part of his ambassadorial role.

The campaign which is part of the  10th Anniversary celebration of the Ashaiman Municipal Assembly started with a sanitation fair dubbed “TOILET IN EVERY HOME” — a campaign against open defecation.

The ‘Kpoo Keke’ hitmaker who was raised from that community has assured the Assembly of his support to promote the fight against open defecation.

“I believe with the Sanitation Fund launched by the Netherlands Embassy (@nlinghana ) together with the Government of Ghana, @unicefghana , Apex Bank; households in Ashaiman can be supported in building their own toilet facilities to reduce open defecation,” he wrote on Facebook.