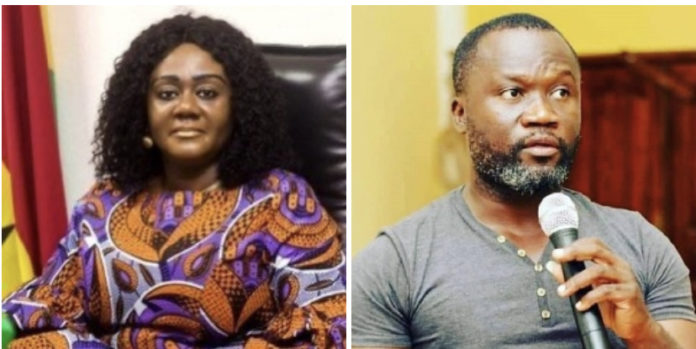 Entertainment critic Ola Michael wants apologists of former tourism minister Barbara Oteng Gyasi to desist from justifying  what he considers as her poor performance in office.

This comes on the heels of the submission by Wei Ye Oteng blaming the COVID-19 pandemic for the unsatisfactory performance of the minister during her stewardship at the ministry.

In a rebuttal statement on Tv3’s “Simply Showbiz” hosted by Miriam Osei Agyeman, Ola Michael said Ghana wasn’t the only country hit by the pandemic and the administration didn’t stop working.

Reiterating Mrs. Oteng Gyasi’s shortcomings, he mentioned her supposedly cluelessness with regard to the sector she once handled and how she wasted a whole year doing nothing impressive to a point where creatives in the movie industry had to commute to her office to educate her on the “Film Act” which needed an activation.

“…we always have excuses of failing. Are we the only country struck by COVID? The last time I checked, her very first conference she had was announcing COVID relief and she was even messing up – throwing figures around. I will not agree with anyone that wants us to believe she couldn’t perform because of COVID. Prior to the pandemic, what did she do with the one year while in office? – Nothing!”

“We had to go to her office from morning to afternoon before she got to know there was a law passed called the “Film Act” that needed an activation.”

He shows his satisfaction with Mrs. Oteng Gyasi not making it as the sector’s minister-designate. However, he is displeased the lot fell on Dr. Awal whom he believes isn’t qualified and experienced enough to lead the sector. The first minister of the sector under the first tenure of the Akuffo Addo-led government, Catherine Afeku remains his choice due to an impressive performance he asserts she put up while leading the ministry.